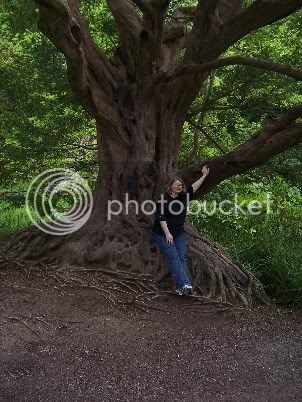 1. Which of your characters is your favorite?
All of them. Most recently it would have to be Mabel the Lovelorn Dwarf. I understand her, and she makes me laugh.

2. Tell me about your travels.
I’ve had the travel bug every since I was a kid. My Dad was a teacher so we went camping every summer, traveling all over Canada and the U.S. My roommates in High School were from Hong Kong so in 1997 I spent 6 weeks traveling Asia with my friends and staying with their families. I was privileged to be there during the handover of Hong Kong to China, witnessing the fireworks from a barge in the Hong Kong Harbour one night, and from a skyscraper along the Harbour the next night. Most recently I spent a year living and working in Northern Ireland which in and of itself is a travel adventure. With my holiday time I had a mini-break in Venice one weekend, Paris over Christmas, and mini-breaks in London, Manchester, and week at the Edinburgh International Book Festival. I still start most of my sentences with “When I was in …” and when I watch movies I frequently comment, “I was there, and there, and there.”

3. Coffee, tea, or milk?
Usually it’s milk, but when I was in Northern Ireland, the ladies at work made the best cuppa tea, especially Bernie. I looked forward to Thursday mornings when she was in for one of her cuppa’s. I’m still looking for a proper cuppa and buiscuits.

8. Where do you find your inspirations to write?
Music used to be what gave me an idea for a story. Mabel is unique though. Mabel’s influence was more of a challenge. I was attending Odyssey Fantasy Writing Workshop in the summer of 2005 and Jeanne Cavelos, our instructor, continually complained about there never being any stories about female dwarves, and she talked about one of the ways to get around the trap of genre clichés is to combine two genres or sub-genres that you like. For one of our journaling assignments I wrote a brief paragraph about Mabel the Lovelorn Dwarf to satisfy Jeanne’s need for a story about a female dwarf. But then I liked Mabel so much and decided that because I like chick-lit and Fantasy, I could combine them to create some originality with Mabel.

10. Are you into sports or other physical activities?
Watching, not playing. Love my hockey, Canadian football, soccer, tennis, figure skating, and I wish I could take holidays so I could watch Olympics. This does not bode well for my writing if I don’t start weaning myself of this addiction. Maybe I’ll consider it after the Stanley Cup final, or Wimbledon, oh but then it’s football so maybe after the Grey Cup?

Sherry Peters lives, works, writes, and plays full time in Winnipeg, Canada. She graduated from the Odyssey Fantasy Writing Workshop in the summer of 2005, after which she lived in Belfast, Northern Ireland for a year. Sherry is currently a Graduate Student in the Seton Hill University’s Writing Popular Fiction M.A. Program where she is writing the first Mabel the Lovelorn Dwarf novel. Her first short story “The Greatest Honor: A Mabel the Lovelorn Dwarf Story” is now available at Aoife’s Kiss. Visit Sherry’s blog at to find out the up to the minute news of Mabel’s whereabouts.
heidi ruby miller heidi's pick six sherry peters