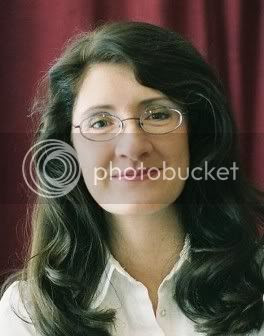 HEIDI'S PICK SIX
1. Which of your characters is your favorite?

2. Tell me about your travels.
Any fellow Duranies reading this one will laugh because all of my travels—much like theirs—the past 10 or so years, have centered around Duran Duran concerts. Going back in time, I've been to Miami, New Orleans, Manchester and Brum, England, Orlando, Kansas City, St. Louis, Tampa, Sunrise, (and here's where the timeline gets fuzzy) Chicago, Las Vegas, Los Angeles, Atlanta, Denver. And most of those have been multiple hits. I had one trip that I won to see Sting over in Paris. That was tres cool. (No, I don't speak French, but a friend coached me on enough phrases to get me through the whirlwind mini-vacation.) Then there were travels for Duran parties, not shows. Those are always fun. The point here is that I have crazed friends in a lot of cities now because of this band that we enjoy seeing. I'll be flying up to New York to see them on my birthday this year. How cool is that? It's a fan-club-members-only show in an intimate venue so I'm going to be in a concert hall with a couple thousand of my sistahs watching/listening to a group I'm obsessed with to celebrate my day. That is a good vacation.

The traveling gene was activated in me upon birth. I think the doctor hit me to get me breathing when I entered the world and it knocked the "will-be-able-to-acclimate-readily" chip into place because I've always been on the move. See, that doctor was on Homestead Airforce Base—I was a military child. I had moved 18 times—including a year in Mallorca, Spain—before I got to college. I inadvertently built this experience into my main character in Choices Meant for Gods. It wasn't until I was preparing an interview for the CMFG Online Book Tour that it hit me: I put Chariss through that same instability. She's been on the run from a madman her whole life, moving from place to place, never settling down, never knowing the security of a consistent home environment. She craves it by the time we meet her in the novel.

5. Who are you reading right now?
Virginia McMorrow (a fellow ArcheBooks author; I edited her most recent Firewing's Shadow so now I'm going back and reading her Mage Confusion trilogy -- fabulous); Dawn Scovill's Immortal Bonds (a fellow ArcheBooks author (VAMPIRES! Woohoo!); Raven Bower's Apparitions (a fellow ArcheBooks author -- I'll never swim in a lake again); Jamieson Wolf's Hunted (a Friday Project author -- I'm a character in this one! I've read it before, but I'm re-reading it so I can write a current review); Juliet Barker's The Brontes A Life in Letters (I've picked through this before for research purposes but I've never sat down and read it straight through -- I'm hanging my head in shame); The Complete Poems of Emily Jane Bronte.

11. What kind of music speaks to you?
All of it. But, to be real specific, see the answer to the travel question above. I listen to just about any kind of music that's playing anywhere. I played the violin, flute, and f-horn in junior and high school. I still have the violin and flute, but both get neglected in favor of the writing career. Anyway, I think those instruments fostered my appreciation of classical music (that and Vivaldi and Chopin were just geniuses). But I'm into anything with a beat (or without). If you look at my profile on my blog, you get a small sampling of some of the things I listen to, but they don't give you enough "room" to list enough. Duran Duran (Arcadia's So Red the Rose album in particular) and Barry Manilow had the greatest influences on my writing during the creation of Choices Meant for Gods, but I have a folder on my iTunes called "Music to Write to" that speaks to me when I'm in the mood for a long writing stretch. It's quite eclectic.

12. Do you outline your stories or do they just take you along for the ride?
It depends on which characters are visiting that day. If Caleb (vampire) is in the room, he looks for the notebooks with the outlines for the vampire stories. He wants order and organization and meticulous attention to detail. Drives me nuts. But I guess that kind of planning helps you survive if you would go up in flames at sunrise without advance planning.

If Nigel Taiman from Choices Meant for Gods is in the room, I'm a happy gal. We just start writing and see where the story's going. He's a fabulous muse to work with. He shackles me to the writing desk and off we go. That's the way to write. Now, this isn't to say I don't know what's happening with the books in the Choices Meant for Gods trilogy. The story is worked out and I have the elements written down, but this is not the "outline" that Caleb demands. 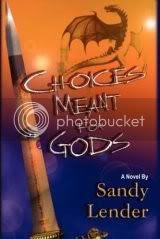 13. Celebrity crush.
Again, the Duranies are laughing. I've been madly in love with John Taylor from Duran Duran since…oh…1983? Listen to the man. Read a couple interviews with him. Then go to one of their concerts and watch him on stage. I guarantee you'll be obsessed, too. Deliriously obsessed. But be careful. He's devoted to his wife (half the attraction, I'm sure). Sigh. I've got this picture of us (and that felt good to type) from December where I've got this really happy smile on my face and I don't look like a stalker at all…

14. Who are the biggest influences on your work?
Jesus Christ—kept that PG rating from going anywhere crazy on Choices Meant for Gods
Charlotte Bronte (as well as Emily and Anne)
Duran Duran (as well as Arcadia)
Chaucer
Whoever wrote Beowulf (I'm finding him when I get to Heaven so I can shake his hand)
All those Old English/Anglo-Saxon warriors!
Dragons
My muses

Sandy Lender began writing stories as soon as she learned to string words together on the page. As a child she entertained the folks in her great grandmother’s apartment building in Southern Illinois with tales of squeaky spiders and mice picking berries, and then won awards with writing projects as she moved through the elementary and high school systems in the St. Louis area. It was apparent that a career in journalism was her calling, and she found herself proofreading, editing, and (finally) writing for trade publications after she graduated from Truman State University in Missouri. Now she writes in Southwest Florida where her love of sea turtles and all things related to the Gulf waters keeps her imagination growing. Her epic fantasy novel Choices Meant for Gods is now available from ArcheBooks Publishing. You can get information about grammar and writing from her main blog Today the Dragon Wins.
heidi ruby miller heidi's pick six sandy lender