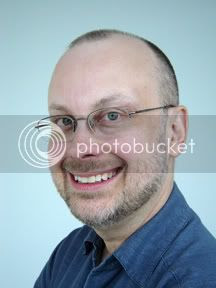 1. Which of your characters is your favorite?
Ponter Boddit. He's a modern-day Neanderthal quantum-computing specialist in my Neanderthal Parallax trilogy. I never start with a character; I'm a thematic writer, and I start by figuring out what I want to say on a high level, then construct the characters that let me get at that. Well, in Hominids, Humans, and Hybrids -- the three books of the trilogy -- I wanted to demonstrate two things: that being powerfully male wasn't at odds with being a pacifist, and being an atheist wasn't at odds with being moral. Ponter embodies both of those things; he's the kind of friend I think most people would like to have.

2. Tell me about your travels.
Well, as I write this, I've just left Orlando, Florida, where I was guest of honor at the science-fiction convention Oasis 20; and I'm now in Sudbury, Ontario, where I was given an honorary doctorate by Laurentian University -- which was one of the absolute highlights of my life. Next month, my wife and I are off to Canada's arctic -- Dawson City, the heart of the Klondike Gold Rush. Pierre Berton, a famed Canadian nonfiction writer, donated his childhood home there to be a writing retreat. Writers apply to a jury to get to go for three months of isolated, uninterrupted writing time. We'll be there for July, August, and September, during which I hope to finish my eighteenth novel, Wake. However, it won't be quite uninterrupted: I've just learned that I'm being given China's top science-fiction award in August: the Galaxy Award, for most popular foreign author of the year. So, I'm off to Chengdu, the capital of Szechuan province, to attend the Chinese national science-fiction convention and receive the award. I spend about three or four months every year on the road, and I absolutely love it.

4. What else can you do besides write?
I have a thriving sideline as a keynote speaker at conferences. This month as I write this (June 2007), for instance, I'm giving keynote addresses at the annual meetings of the Cancer Patient Information Network in Montreal; the Canadian Public Relations Society in Edmonton; the Health Sciences Communications Association in Toronto; and Osprey Media -- a publisher of community newspapers -- in Collingwood, Ontario. I get paid as much for each of these one-hour talks as I got for an advance for my first novel, and I love doing it. I usually talk about the future -- the next five, ten, or twenty years -- and what's going to happen in whatever area the conference is focussing on. It's extrapolation and rational prediction -- all the things I do in writing my science fiction, and it's really gratifying to see businesses finally recognize that the best futurists out there are in fact science-fiction writers.

5. Who are you reading right now?
As preparation for the trip to the Yukon, I'm reading I Married the Klondike, a Canadian nonfiction classic, by Pierre Berton's mother, Laura. It's charming and fascinating. And I'm just about dive into Douglas Hoffstadter's I Am a Strange Loop, which looks fascinating. Most of my reading right now is in the area of consciousness studies, computing, and game theory -- all of which will figure in my new novel, Wake.

7. What is the toughest scene you ever wrote?
There's a scene in my Hugo-award nominated novel Frameshift set at the Treblinka death camp. It features real people -- real survivors, who staged a prison break from there. Obviously, what happened at Treblinka was horrific, and I felt an enormous obligation to get the details right, and to treat the survivors with dignity. After doing all the research, but before writing the scene, I went and sat outside for a long time at a Holocaust memorial in Toronto, really trying to hear the voices, if you will, of those who could no longer tell their stories.

8. Where do you find your inspirations to write?
It really is in part through my travels. I mentioned the Holocaust memorial a moment ago; I think the best thing I've ever written is a chapter in Humans, the middle volume of my Neanderthal Parallax trilogy, that's nothing but two people reading letters left at the Vietnam Memorial on the Mall in Washington, D.C. The notion of the writer in the garret is nuts; yes, I'm going on a writing retreat this summer, but that's an aberration, and a special treat: a real writer has to be out there, seeing people and things.

12. Do you outline your stories or do they just take you along for the ride?
The farther along you go in your career, the less you have to write to get a book contract. That's a mixed blessing. On the one hand, it's good to know that your publisher has faith in you. On the other hand, it does mean that you can end up stumbling around, searching for your story. I confess to not doing a lot of outlining, and that means I do sometimes end up going down blind alleys; I typically throw out 20,000 words or so of draft material for every 100,000-word novel I write. But I find that I really do discover the best stuff -- the perfect symbolism, the most apt character bit -- in the act of actually fleshing out a scene; I just can't see that level of detail from a distance.

14. Who are the biggest influences on your work?
There's a saying that the golden age of science fiction is when you are 15 -- whenever that happened to be. Well, I was 15 in 1975, and the great writers of the mid- to late-seventies were Arthur C. Clarke, Larry Niven, and Fred Pohl; they certainly had huge impacts on me. I credit my cosmic vistas to Clarke; my intriguing aliens to Niven; and my flawed humans to Pohl. My own view is that science fiction should combine the intimately human with the grandly cosmic: I believe SF should give equal weight to "science" and "fiction," should speak both to the intellect and the heart.

Rob is also the only writer in history to win the top SF awards in the United States, China, Japan, France, and Spain. In addition, he's won an Arthur Ellis Award from the Crime Writers of Canada as well as nine Canadian Science Fiction and Fantasy Awards ("Auroras").

Maclean's: Canada's Weekly Newsmagazine says, "By any reckoning, Sawyer is among the most successful Canadian authors ever," and Barnes and Noble calls him "the leader of SF's next-generation pack."

Rob's novels are top-ten national mainstream bestsellers in Canada, appearing on the Globe and Mail and Maclean's bestsellers' lists, and they've hit #1 on the bestsellers' list published by Locus, the U.S. trade journal of the SF field. His seventeen novels include Frameshift, Factoring Humanity, Flashforward, Calculating God, and the popular Neanderthal Parallax trilogy consisting of Hominids, Humans, and Hybrids.

He's often seen on TV, including such programs as Rivera Live with Geraldo Rivera, Canada A.M., and Saturday Night at the Movies, and he's a frequent science commentator for Discovery Channel Canada, CBC Newsworld, and CBC Radio. He has been the subject of an hour-long Canadian TV documentary ("In the Mind of Robert J. Sawyer"), profiled for an entire half-hour episode of "Credo," and twice been "in the hot seat" on Vision TV's "Test of Faith" with Valerie Pringle.

Rob has given talks at hundreds of venues including the Library of Congress and the National Library of Canada, and been keynote speaker at dozens of events in places as diverse as Los Angeles, Boston, Tokyo, and Barcelona. He was born in Ottawa in 1960, and now lives just west of Toronto with his wife, poet Carolyn Clink.

His new novel is Rollback.
> 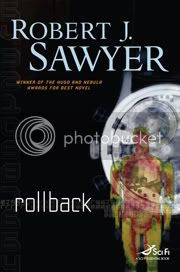