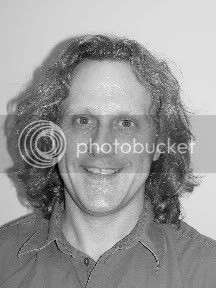 Usually the one I'm currently writing. Maggot, the title character of The Prodigal Troll and some stories in F&SF, is so much fun to write because he's such a fish out of water, neither man nor troll, and never really understanding other culture. People see him and think Tarzan, but the whole point of Tarzan is that he fits in everywhere, learns everything, masters every environment. Maggot's much more confused and dysfunctional than that, and in his shock at war or his reluctance to kill, he's more heroic to me than many other heros.

Then there's Proctor Brown, the Massachusetts minuteman who discovers he's a witch. He's in a story coming out in F&SF and is the main character in a current novel project. I like him because I like the Revolutionary period, the real bravery and sacrifice that was involved, and here is a character who embodies all that along with some of the less noble history before that and the contradictions that arise from that history.

I also just finished writing another Maxim Nikomedes novella. Max is the protagonist in The Political Officer, and he's jaded and cynical and a compulsive liar, which makes him tremendously fun to write. I expect to do more with Max if I sell the new story.

5. Who are you reading right now?
I just finished serving a term -- and no, that's not meant to sound like prison -- as co-chair of the jury for the Andre Norton Award, so I received and read part or all of about a hundred novels this past year, many of them crammed into the final couple months before we made our decision. I'm recovering from that by reading magazines. I just caught up with the last three months of F&SF and have been perusing Strange Horizons. Besides that, I'm immersed in histories of the Revolution and witchcraft right now as research for the new project.

6. Pop culture or academia?
I'm torn between the two, mostly because I suck in some ways at both. I mean, I didn't own a TV or go see hardly any movies for about ten years, and even before that my pop culture exposure was spotty. Ted Chiang did an intervention for me at Rio Hondo one year because I had never seen Blazing Saddles. So that all adds up to crappy pop culture street cred, you know? But I grew up on comic books and still have copies of the "Doomsday Plus One" comics that started John Byrne's career at Charlton and some of the old Mike Grell Warlords and even a few Captain Canucks, and now I have a dvd player and Netflix and love Buffy and Firefly and CSI, and all that is about as poppy as you get.

On the academic side, I've spent twelve years in universities because of changing majors and dropping out and going back. I've co-authored a chapter in a college textbook and was a graduate research assistant for two award-winning books on early American history, and I defended my master's thesis and then didn't earn because I failed to file the paper work in time. It's the same thing as pop culture: I've got some background, and some niches with things I love.

12. Do you outline your stories or do they just take you along for the ride?
I outline longer works. Often I start out knowing what the final scene is and then it's a matter of finding out how my characters get there. Once in a while, though, I'll write something with serious off-road capability. While I'm writing, I'll come to a spot along the road I've planned and suddenly it'll veer off into the bush. I enjoy that too.

14. Who are the biggest influences on your work?
Burroughs, Tolkien, and Bujold are the writers who made me want to write. Like many apprentice writers emulating their idols -- think of Faulkner trying to write poetry like Elliot comes to mind, or Michael Shea's first novel published as a sequel to one of Jack Vance's books, (and there's that whole pop culture vs. academia question in a nutshell all over again) -- you can find some of my early works that riff on scenes or themes from Burroughs and Bujold, and another story is a satire on Tolkien. But then there are other stories where I was trying to master things done by Lieber, Sterling, Hemingway, and Lovecraft. We have a library at home with a few thousand books and magazines: these days, I point to the shelves and call it my tool box. When I'm trying to get the story out of my head and onto paper, I'll use whatever tools I can borrow from any of those writers.


Charles Coleman Finlay worked for John Galipault at the Aviation Safety Institute (a forerunner of Europe's Eucare safety project), briefly served as a studio assistant for porcelain artist Curtis Benzle, and studied Constitutional history with Saul Cornell, where he helped to research The Other Founders which won the 2001 Society of the Cincinnati Prize for history. He learned something about following one's passions from the first, about artistic vision from the second, and about disciplined writing from the third. All of it looks much more interesting in retrospect than it did at the time.

His first short story, Footnotes, a series of footnotes to a history article about a future disaster, appeared in the August 2001 issue of Fantasy & Science Fiction, where he has since become a regular contributor. In 2003, he was a finalist for the Nebula, Hugo, Sidewise, and John W. Campbell Awards. His fiction has appeared in Year's Best Science Fiction, Year's Best Fantasy, and the Mammoth Book of Best New Horror, as well as numerous magazines and anthologies.

Besides writing fiction, he serves as Administrator for Online Writing Workshops and builds a research database for historians and constitutional scholars. He lives in Columbus, Ohio, USA, with his wife, writer Rae Dawn Carson, and where he does little else of interest and looks forward to more retrospect.

His latest short story An Eye for an Eye was in the June issue of Fantasy and Science Fiction. You can find him on Live Journal at ccfinlay.
charles coleman finlay heidi ruby miller heidi's pick six