1. Which of your characters is your favorite?
This is a difficult question, and that's why I decided to answer it. I like a challenge at times, as long as it's mental and not physical. So, really, my favorite characters I write challenge me and present me with stuff that I had no clue was coming, or are more complex than I ever thought they would be. To pick one is tough, since I have so many of their voices yammering in my head. Since I am focused on my current novel rough draft, I'd have to pick one from there. Lazarus - he is a drunk, a lecher, a spirit seeker (one who puts the souls of the dead to rest), yet when he feels something is wrong, he wants to make it right, and he's willing to help after some cajoling (and being taken down a couple rungs), even with his not-so-appealing personality. The thing that makes him the most interesting to me, is the drinking and sleeping around are merely a way for him to seek the warmth from a life full of coldness. I still think there's so much more about him I have yet to discover.

4. What else can you do besides write?
I tend to be mediocre at many things, not really excel at certain things. I feel I have a moderate talent at drawing - nothing looks totally realistic, but I enjoy doing it. Cross-stitching is another favorite pastime, as well as video games (Everquest addict kind of - hey it takes patience to learn how to play a character to its best potential!).

7. What is the toughest scene you ever wrote?
The type of scenes that are toughest for me are physical fight scenes. It might be because I don't know enough about weapons or the martial arts, but I always have a difficult time writing scenes like this. So, I can't say there was one horribly tough scene because all of these are a pain for me. I'd rather be in the middle of verbal banter or high emotional scenes then in the middle of a fast-paced action fight.

8. Where do you find your inspirations to write?
Some of what I decide to write comes from dreams. Just a little snippet of a dream can unravel a whole novel idea in my head. Many times I get images flashing in my head when I listen to music - I would say that's my biggest inspiration. The novel I am currently working on started as a strong image of a woman in colorful wraps who refused to/could not speak and I knew her title was Shepherd of Dreams, and many other things about her flashed in my mind as well - this all from one song that I listened to (and my husband will attest to me putting single songs on repeat). A song is worth a thousand words...or a hundred thousand...

11. What kind of music speaks to you?
I listen to all sorts of stuff, and most of it speaks to me, telling me there's a story that could be fueled by it. Most of what I listen to lately is gothic, alternative, some hard rock. I also have the odd video game/anime soundtracks that are quite fun and relaxing. Oh, and I can't forget Madonna - I've been listening to her since I was 9 or 10 years old.

12. Do you outline your stories or do they just take you along for the ride?
The characters take me along for a ride. ;) I detest outlining. It stifles me. Usually when I start something, I have the character first, or a little about the character. I'm telling that character's story (or characters' stories), and if I have an outline, it wouldn't give the character a chance to grow and for me to learn new things about them. I like the freedom of just plowing ahead and knowing that a turn might be taken that I never expected.

Alexa Grave has been writing fantasy for over thirteen years, since she was fourteen. Her first attempts were anything but publishable. Her writing ability has only grown since the beginning, and she knows there's plenty of room to improve - it will always be a learning process.

She has a Master of Arts degree in Writing Popular Fiction from Seton Hill University. Most of what she writes is dark fantasy like her story Kindled Morphogenesis from the Fantasist Enterprises anthology Modern Magic, but she enjoys her attempts at the humorous side of things. She's also tried her hand at poetry, horror, and mainstream. 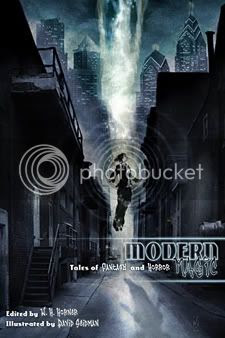 She is a member of Broad Universe.

Alexa's life isn't filled with writing alone; she has a supportive husband (who thinks he puts up with too much at times, like any spouse), three cats, two turtles, and a fish tank. Her thirteen-year-old goldfish (to the day of winning him at a fair) passed away on July 4, 2006. Until his death, he was the only thing in her life that was older than her love of writing.
alexa grave heidi ruby miller heidi's pick six