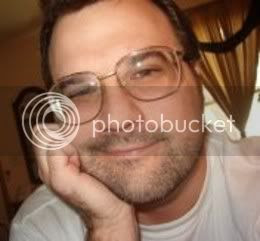 3. Coffee, tea, or milk?
Beer. I love beer. In fact, back in '93, I married a case of Corona. She had nice cans, and went down easy. Unfortunately, it didn't last more than three days. You could say I pissed that marriage away.

4. What else can you do besides write?
I can tie a cherry stem into a knot with my tongue. Plus other stuff, probably. Like Jenga.

5. Who are you reading right now?
On the Ropes by Tom Schreck. It's a mystery about a boxer-slash-social worker named Duffy, and it's funny as hell.

Tom has got a great website at www.tomschreck.com. Tom also owes me some steaks for mentioning him here. Mmmm. Steaks.

8. Where do you find your inspirations to write?
In the laughter of children. And that's gotten me into trouble with the authorities.

13. Celebrity crush.
I've got a teensy tiny crush on Tess Gerritsen that's totally platonic, because of the restraining order. I also have a crush on Barry Eisler, which isn't so platonic. He's dreamy.

15. Do you still watch cartoons?
I've got Thundarr the Barbarian and The Herculoids on my iPod, and complete DVD sets of Spongebob and Aqua Teen Hunger Force. Plus, I make my own cartoons. But I don't use film, or a computer. I use pretzels. And rather than animate with them, I eat them. But I make them do a little dance before they go into my mouth, and I pretend they're screaming while I chew.

This was fun. But next time I get to ask the questions, Little Miss Nosy.

In 2003 J. A. Konrath signed a three book deal with Hyperion for the Lt. Jacqueline "Jack" Daniels thriller series, which includes Whiskey Sour, Bloody Mary, and Rusty Nail. His latest novel in the series Dirty Martini will be released on July 3.

His blog A Newbies Guide to Publishing has been helping writers since 2005.
heidi ruby miller heidi's pick six j. a. konrath