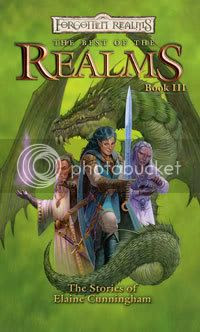 The Stories of Elaine Cunningham

1. Which of your characters is your favorite?
It’s really difficult to name a single one, because you need to identify with your characters when you’re writing them. By that, I don’t mean that you have to be LIKE them, but you need to have a connection with them and understand how they think and feel. This goes for “villains” as well as protagonists. I don’t have a favorite, but I do find that some are easier to write than others. I have a good time with Danilo Thann and Elaith Craulnober, two characters from my Songs & Swords books, a fantasy series set in the Forgotten Realms.

2. Tell me about your travels.
My idea of an ideal trip involves castle ruins and historic sites by day, traditional music pubs in the evening. We’ve taken family vacations to Scotland and southern England . The latter was something of an Arthurian pilgrimage, in that we visited many of the sites associated with the Matter of Britain: Glastonbury Tor, Tintagel, Cadbury hill, Stonehenge . We also visited the Roman ruins at Bath , spent a couple of days in London , attended a performance at the Globe Theatre. I’ve been to Ireland twice—can’t wait to go again! And I spent a terrific weekend in Braunsfel , Germany , as a guest at a fantasy convention. A family vacation spent poking around in the Caribbean for a week or so. Other than that, most of my travels have been in the continental US and Canada .

3. Coffee, tea, or milk?
All of the above. Good coffee falls somewhere on the line between “passion” and “obsession.” I can even deal with bad coffee, provided it comes with enough milk and sugar. Some people go to Ireland and splurge on Guinness; my indulgence was Irish tea with creamy milk and the raw sugar that’s typically served. Love the whole gamut of tea: green tea, jasmine tea, black tea, just about any herbals. The only exception is Lapsang Souchong; I have to be in the mood for strong, smoky-tasting tea, and that mood doesn’t strike very often. At home it’s coffee in the morning, tea in the afternoon and evening. I frequently brew a pot of green tea, then mix it two to one with blueberry pomegranate juice. Very refreshing and loaded with antioxidants.

5. Who are you reading right now?
I just read The Hearing Trumpet by Leonora Carrington, a surrealist writer and painter. Before that, I read In the Beginning, an as-yet-unpublished, literary historical by Susan Onthank Mates. It’s a demanding book, hard to classify, but incredibly rewarding. Before that, Innocent in Death, the latest book in the futuristic police procedural series by J.D. Robb. Another recently read book was Bernard Cornwell’s Lords of the North. I read a couple of very short paperbacks by J. Robert King: Humors, a collection of prose poems, and Suicidals Anonymous, which is a very funny commentary on the writing life. I read a lot of history. These days I focus primarily on 16th century Scotland . I’ve recently started teaching writing workshops, so I’ve been reading books on writing to see how other people have approached process. I read Jim Butcher Dresden Files series, and I’m looking forward to Charlaine Harris’s next books, both in the Sookie Stackpole series and the new Harper Connelly series.

6. Pop culture or academia?
Both. I’m equally happy reading a fun, fast-paced urban fantasy or a well-written historical tome. If I won the lottery, I’d go back to school for advanced degrees. History, to start with. Folklore and anthropology. Comparative Lit. And so on.

11. What kind of music speaks to you?
A wide range, depending upon mood and circumstances. I used to be a music teacher, so I’ve had a lot of training over the years, and my tastes run to classical and roots/traditional. Most of the concerts and festivals I attend these days are traditional Celtic music, and I’m focused most of the time I spend on music (which is not nearly as much as I’d like) playing my Celtic harp. I like Renaissance music, both vocal and instrumental, and I like some of the Renaissance or medieval fusion bands. I love the classically trained voice—choral music, art song, and opera—but I frequently find this kind of music difficult to listen to because it’s a reminder of something I stopped doing years ago, and shouldn’t have.

12. Do you outline your stories or do they just take you along for the ride?
I outline. The details will often change as I get to know the characters better, and the end result is usually different from the original outline, but I think it’s important to have a plan.

At a very early age, Elaine Cunningham developed a profound love for books and stories. Her sister and she made frequent trips to the local library, where they'd take out the maximum number allowed and go back for more as soon as someone would drive them there. The habit stayed with her; these days she reads about 200 books a year.

Elaine started writing young, too, but at the time her primary literary ambition was to illustrate books, not write them. Her interest in art gave way to a focus on music, but it seemed that she was always writing something: poetry, song lyrics, journals, voluminous letters to friends and family. The notion of writing professionally didn't occur to her until she was in her twenties, after the birth of her first son. She was making a career switch at the time and was in an MBA program, but she couldn't stand the idea of being away from this wonderful little person all day long. So her husband suggested that she try writing, pointing out that with her interest in reading, it might be a good fit. (Apparently it was -- her "baby" is now six foot three, and Elaine is still writing.)

At first she tried traditional romance, with the mistaken idea that it would be an easy place to start. She wrote and submitted several manuscripts -- all of them with quirky, non-traditional characters -- but was never really happy with the result. Neither, apparently, was anyone else. A friend of hers, a true fan of the genre, read her latest attempt and said, "Girl, you don't have a romantic bone in your body. Face it: you're weird. Maybe you should try science fiction or fantasy."

She did and has produced twenty books and numerous short stories in the genre, including "Dead Men Tell No Tales" appearing this summer in the Fantasist Enterprises' anthology Sails and Sorcery:Tales of Nautical Fantasy.