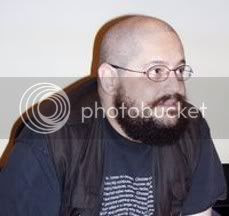 1. Which of your characters is your favorite?
I have two answers to this question: (a) I try not to pick favourites, and (b) that would be telling.

2. Tell me about your travels.
I travel too much. It's disruptive I can't write effectively while I'm traveling -- but I'm away from home for 2-3 months of the year. What I can say in my defense is that I write full-time, and it's a pretty isolating job; if you don't get out of the house from time to time you go nuts. So I go to SF conventions, I do speaking gigs, I even (occasionally) go on vacation. It seems to be an occupational hazard for writers ...

3. Coffee, tea, or milk?
Used to be coffee, but some time during the dot-com years I burned my stomach out and started getting acid indigestion. So these days I drink copious amounts of tea -- 3-6 litres a day -- and it's brewed for caffeine: milk, no sugar, and ideally it's bright orange and corrodes the spoons if you leave them in it too long.

4. What else can you do besides write?
I'm a one-trick pony. I don't play any musical instruments, I don't sing or dance, I don't speak any other languages, I'm kind of short on hobbies. (I drink beer, but I wouldn't call that particularly interesting ...) It's given to very few people to be very good at more than one thing; I'm not a polymath, so I put most of my effort into writing.

5. Who are you reading right now?
I'm currently re-reading God Stalk by P. C. Hodgell, a rather remarkably overlooked classic of the fantasy genre. And I'm reading a couple of non-fiction books about Eliza Lynch, the 19th century adventuress who precipitated the War of the Triple Alliance (the most disastrous conflict in 19th century South American history). And the current issue of New Scientist.

6. Pop culture or academia?
Pop culture, I think, but not to the exclusion of academia.

7. What is the toughest scene you ever wrote?
The novelette Nightfall (the fifth chapter of Accelerando) was kind of hard. In fact, it was so hard that I took four months off in the middle of it -- at the point where I was trying to get a handle on Amber's situation inside a vast, ancient alien artefact millions of years old inhabited by a sapient pyramid scheme that was trying to mess with her head -- and by way of convincing myself that I was busy I wrote an entire book. Which then got chopped into two and became the first two volumes of the Merchant Princes series -- it was the longest novel I've
ever written.

But that's probably not the hardest. There was a scene in my novelette Antibodies that was so hard I put it down and didn't pick it up again and make any significant progress for six years. I think it involved a woman sitting on a park bench, cutting up credit cards ... and her motivation.

8. Where do you find your inspirations to write?
What is this "inspiration" you speak of?

9. Food you could eat everyday.
Bacon. (Comes of having a Jewish upbringing ...) Preferably a bacon and cream cheese bagel. (It's a good thing I live with a militant vegetarian who won't let me keep bits of dead pig in the larder.)

10. Are you into sports or other physical activities?
Not really, but I swim regularly -- I aim to do at least half a kilometre non-stop at least three times a week. And I walk, lots: I live in a dense city that predates the automobile, so parking is nightmarish here. As a result, my car stays parked unless it's needed for moving cargo or multiple people about, or for journeys over about five kilometres in a direction where public transport is inconvenient.

11. What kind of music speaks to you?
Electronic/industrial/punk/alternative. Classical leaves me completely
cold.

12. Do you outline your stories or do they just take you along for the ride?
It varies from story to story. Sometimes I write by the seat of my pants -- although I tend to have a lot of mental background notes before I start going -- but sometimes I outline in depth. In the case of one novel, the outline's word count was 10% of the length of the final book.

13. Celebrity crush.
What is this "celebrity" you speak of?

14. Who are the biggest influences on your work?
I'm probably not going to surprise anyone if I mention Bruce Sterling as having been hugely influential (followed, perhaps, by Neal Stephenson). But I was writing -- in fact, selling short stories in Interzone -- before I ran across either of those authors' works. In non-science-fictional writing I probably tend to pay too much attention to Christopher Brookmyre. The same goes for most of the author authors I respect. In general, I try not to be overly influenced by other people -- it's not good, if you want to develop your own voice.

15. Do you still watch cartoons?
Occasionally. But the thing is, I probably only watch 2-3 hours of television a week, tops. I've never been a great TV watcher (or media watcher -- I probably watch 1 DVD a week, max, on average), and the TV is mostly used as somewhere to park my eyeballs while I'm eating dinner.

Born in Leeds, England, Charles Stross knew he wanted to be a science fiction writer from the age of six, and astonishingly, nobody ever considered therapy until it was too late. He didn't really get started until his early teens (when his sister loaned him a manual typewriter around the time he was getting heavily into Dungeons and Dragons); the results were unexpected, and he's been trying to bury them ever since. He made his first commercial for-money sale to Interzone in 1986, and sold about a dozen stories elsewhere throughout the late 1980s and early 1990s before a dip in his writing career. He began writing fiction in earnest again in 1998.

Along the way to his current occupation, he went to university in London and qualified as a Pharmacist. (This is what you get for listening to people who tell you "but you can't earn a living as a writer -- get a career first!") He figured out it was a bad idea the second time the local police staked his shop out for an armed robbery -- he's a slow learner. Sick at heart from drugging people and dodging SWAT teams and gangsters -- it's hard to do that when you're wearing a lab coat -- he went back to university in Bradford and did a postgraduate degree in computer science. After several tech sector jobs in the hinterlands around London, initially in graphics supercomputing and then in the UNIX industry, he emigrated to Edinburgh, Scotland, and switched track into web consultancy and a subsequent dot com death march.

All good things come to an end, and Stross made the critical career error of trying to change jobs early in 2000, just in time for the bottom to drop out of the first dot-com boom. However, he had a parachute: he was writing a monthly Linux column for Computer Shopper, and by a hop, a skip and a jump that would be denounced as implausible by any self-respecting editor, he managed to turn this unemployment into an exciting full time career opportunity as a freelance journalist specialising in Linux and free software. (The adjective "exciting" applies as much to the freelance journalist's relationship with their bank manager as to their career structure.) Even more implausibly, after fifteen years of abject obscurity, his fiction became an overnight success in the US, with five novel sales and several Hugo nominations in the space of two years.

His first short story collection Toast comes out at the end of this year in a signed limited hardcover edition through Wyrm Publishing.