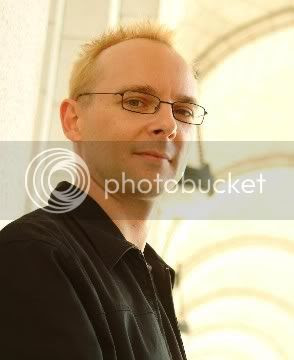 1. Which of your characters is your favorite?
Skender Van Haasteren X from the Books of the Change/Cataclysm. He's me as I was when I was a teenager: smart but at the same time terribly dense, and hopeless with girls. He's a geek dropped into a fantasy setting, and I have a great time writing him. I've used him in six books so far, and while I have no plans for any more at the moment, I won't rule anything out. He's so much fun to torture.

2. Tell me about your travels.
Most of it is for work. I come to the US at least once a year for the Writers of the Future presentation ceremony, and I try also to get to a WorldCon or World Fantasy every couple of years. Work takes me around Australia pretty regularly. I've been to several places in Asia, and New Zealand, but apart from a short stop in London I've never been to Europe. That, partly, is why I can't write fantasy in the Tolkein vein. Snow? Never seen it. Forests and wide rivers? Completely outside my experience. Freezing to death? Inconceivable!

Like everyone else, I also travel through time at the rate of one second per second. That thought gives me a little buzz whenever it occurs to me. For now, though, we're very much trapped to that particular conveyor belt, and I can't wait for the day someone invents a temporal accelerator (or brake). The temptation would be very strong to put the foot down on either pedal. Hard.

3. Coffee, tea, or milk?
I'll pass on all three, unless the caffeine has been removed and the milk is soy. A water-based hot chocolate is my morning drink of choice (marshmallow optional).

7. What is the toughest scene you ever wrote?
Back in 1995, I wrote a story called "Passing the Bone". It's about a man murdered in the central Australian opal mining town of Coober Pedy. All the men in his family have been cursed to die young and become undead, so he wakes up as a zombie with only two thoughts in his mind: to get revenge on his murderer, and to say goodbye to his young son, who lives on the other side of the country. It's kind of a zombie road story, because this poor dude has to get to Sydney before he disintegrates. It could've been played for laughs, I guess, but at the time I wasn't feeling much like laughing.

At the time, I was trying to get my head around the bond I had developed with a child who wasn't genetically mine but who I had come to think of as a son. His mother and I had had a kind of falling out; things were tense and awkward; I was confronting the possibility that Seb and I might not always be in the kind of relationship we'd become used to. A very painful wrench seemed very much on the cards. So the scene where the main character in "Passing the Bone" does finally come face to face with his boy, and has to say farewell to him forever, was absolutely horrible. It might also have been the best scene I've ever written. (Who was it who talked about writing on the edge of your emotions? A wise person, that one.)

Anyway, Seb, his mother, and I got over that little hurdle, and we're still extremely close. He remains the son of my heart. I'm glad that life has had a happy ending, even if the story it inspired did not.

11. What kind of music speaks to you?
All kinds. Music is my other true love. In an alternate universe, I chose music ahead of writing, and I'm now composing scores for shows like Angel and Lost. (I wish!) Music from every imaginable genre interests me, but I'm very particular about what I listen to, if that makes sense. I'm not indiscriminate.

When I'm writing, I can't listen to anything too boisterous, or anything with lyrics, so the majority of the time I'm playing artists like Steve Roach or Biosphere--musicians capable of creating music with intense ambient energy. Not New Wave, exactly, and certainly not for background listening, but giving off a vibe that helps me tap into my own creativity without getting in the way. Only when I step back from the laptop and do other things do I get to crank up the stereo and sing along. My current favorite band is The Whitest Boy Alive. That music really speaks to me, in a happy/angsty/80s kinda way. I am a teenager again when they're coming out the speakers. That's occasionally a good thing.

13. Celebrity crush.
Zhang Ziyi for her role in The House of Flying Daggers. *swoon*

Sean Williams writes for adults, young adults and children. Multiple winner of Australia's speculative fiction awards, New York Times-bestseller and judge of the Writers of the Future Contest, he lives with his family in South Australia. His twenty-second novel Saturn Returns is out this month.