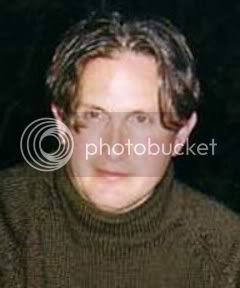 1. Which of your characters is your favorite?
Wow, that's tough. I really love Cotton Coleridge from The Wicked West books because he's this educated man who is also at home in nature and in these incredibly tough situations and in spite of the living hell he goes through he never loses his basic decency and humanity. I'm also quite partial to Terry Sharp - the Brit movie director by day who fights supernatural forces by night. I love the notion of a fellow who generally works "in his head" having this whole action side. Plus I get to play around in the world once populated by Hammer Films so - what's not to like?

Of course, there are several characters I'm crazy about in Feast of the Seven Fishes, but they're based on real-life family members so I guess they don't count. Ditto The Chelation Kid which deals with my son's autism.

5. Who are you reading right now?
I have a bad habit of reading several books simultaneously. I just finished The Last Witchfinder by James Morrow - which is brilliant. I'm reading Mountain Lion by Chris Bolgiano - I love books like that - The Nine Mile Wolves, The Lost Grizzlies and so on. I'm rooting for the wolves to come back. I'm also reading Gibbons' Decline and Fall of the Roman Empire.

10. Are you into sports or other physical activities?
Yeah, I'm a weird guy. I love football. I lettered in football, basketball and track in high school - which I guess is strange for a comic book/horror movie geek. I enjoy the Pittsburgh Steelers and NCAA basketball. I still do a lot of hiking and fly fishing. Used to practice aikido quite a bit but don't get to anymore.

11. What kind of music speaks to you?
Great question - one I've never been asked. I'm even skipping pop culture vs. Academia (the latter wins, btw). I write to music generally. For horror I write to Goblin (they scored much of Argento's work and the original Dawn of the Dead). I love Celtic in all its incarnations - particularly a fiddler from Canada named Ashley McIsaac.

I love Classical and jazz - though I'd hardly call myself an expert or even someone of refined tastes. But if you can't find something to inspire you in Beethoven or Vivaldi or Dave Brubeck - well, more's the pity. I just enjoy the music as an antidote to the utter crap on the radio. Not that I'm a snob - I just find current pop/rock music for the most part boring.

I've always loved Springsteen. Love The Pretenders, Allman Brothers, Pink Floyd, Dave Matthews, Rusted Root. I really resist corporate music - I mean, for the most part I think they've killed country. There are always exceptions to be sure but generally. I love Johnny Cash. Dwight Yoakum. Patsy Cline. Waylon. Willie. Hey, I am from West Virginia.

I wish I had a better signal for WYEP out of Pittsburgh. The best station in the US for my money - lots of great Americana. Oh, currently listening to The Little Willies - an album that really works for my wife and me.

12. Do you outline your stories or do they just take you along for the ride?
I meticulously outline my stuff. Anyway I that say this it's going to come out bad but to do otherwise, in my opinion, does a great disservice to the work and the reader. I've heard people say that outlining is confining - but like storyboarding in film I think the opposite is true. A good outline gives you the confidence to leap into unknown areas.

Robert Tinnell is a screenwriter, director and author whose works include the films Frankenstein and Me and Believe and the graphic novels The Black Forest, The Living and the Dead, and Sight Unseen. His book, Feast of the Seven Fishes was nominated for an Eisner Award for Best Graphic Album - Reprint. Currently, Tinnell is writing The Chelation Kid, a webcomic dealing with his son's autism, and EZ Streets in collaboration with Mark Wheatley as well as various screenwriting and directing projects.