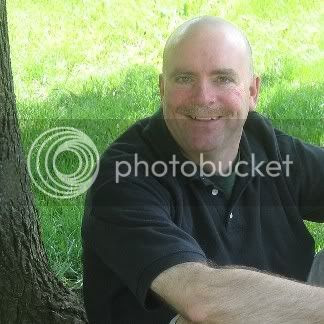 1. Which of your characters is your favorite?
At the moment? Probably Ben Rymar from my Silent Empire science fiction
books (Dreamer, Nightmare, Trickster, and Offspring). He's such a nice guy, and fun to write about. I realized I was in danger of letting him take over the series as a protagonist, but Ben isn't protagonist material. I had to watch myself so he'd stay in the background.

Ask me next year, and I'll probably give you a different answer.

2. Tell me about your travels.
The most recent "big" trip came the summer of 2005 when my wife and I went to Ukraine to adopt two children. We spent almost four weeks there, mostly in Kyiv, and got to see both the tourist stuff and the "real" Ukraine. We refused to eat at McDonald's, the food everywhere was really good, and Eastern Europeans are friendlier than their reputation. We did run into two con artists, but we walked away from the first, I snarled at the second, and neither of them got what they wanted. It was good to come home, but with two more children in the house, the journey was really just beginning!

3. Coffee, tea, or milk?
Diet Cherry Coke, baby! Coffee is just nasty, even when you dress it up. Tea works if DCC ain't available.

6. Pop culture or academia?
Ha! I teach a class about pop culture. So I get both sides! Though I have to say, I don't understand people who snub popular culture in favor of academics. To paraphrase Stephen King, do they think they get brownie points for ignoring their own culture?

7. What is the toughest scene you ever wrote?
The one that stands out comes from my first novel. Lance, the main character, suffers from dissociative identity disorder (shrink-speak for "multiple personalities") and it was difficult to get into Lance's minds sometimes. Toward the end of the book, I wrote a scene in which Lance
is talking to a psychologist, and he says:

"We don't need to integrate, Doctor. Because of Robin, I was able to learn a lot about myself and my MPD. Most people who have it can't even talk to their alters, but I can--and I like how it works out. I just wanted to let you know that and thank you for your help. You were the one who helped us get started. I wish we could come see you in person, but Mom and Dad are fighting over England on the corporate level and we don't want to get caught in the middle."

After I finished the scene, I realized that I had Lance smoothly shifting between "I" and "we"--and that I hadn't even noticed I was writing that way. I had crawled so far into his head that Lance, a complete lunatic, had become normal to me. The realization kind of freaked me out and I had to go for a walk to calm down.

12. Do you outline your stories or do they just take you along for the ride?
I have to outline, both short stories and novels. I need to know in advance where the story will end and how it'll get there. Twice I've tried writing stories off the top of my head, and both times were complete disasters. The outline is my friend!

Steven Piziks has been writing since he could hold a pencil. His very first novel was about a boy who was kidnapped by aliens living under the ocean. It was never published and the manuscript has since mysteriously disappeared.

He got his start in professional publication when he was fourteen years old with an article about raising rabbits in the September 1981 issue of Mother Earth News.

Born in Saginaw, Michigan, he grew up in the back woods of Wheeler, a town so small it doesn't even have a crossroads. The telephone system uses a party line to this day. When Steven was twelve, his family moved to the outskirts of Midland, home of Dow Chemical. He says this explains a lot. Then they moved to Saginaw, where he graduated from high school. From there, Steven went to Central Michigan University, where he eventually got two Bachelor's degrees--one in German/speech and one in English/health education. In 1991, he married his wife Kalathena and moved to Ann Arbor. He received a Master's of Art in Writing Popular Fiction from Seton Hill University and is currently a mentor with the program. He also teaches English in Michigan.

His works include: Dead Man on the Moon: An LCSI Novel, The Silent Empire Novels, and the forthcoming Unity: A Battlestar Gallactica Novel, all written as Steven Harper, and In the Company of Mind, Identity, Exorcist: The Beginning, Corporate Mentality, and The Nanotech War (Star Trek Voyager) as Steven Piziks, and numerous short stories as both Stevens.
heidi ruby miller heidi's pick six steven harper steven piziks