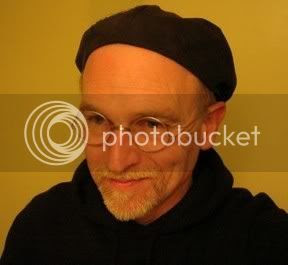 4. What else can you do besides write?
Evidently, not much. I'm not a scientist, I don't have a tech career or any of that. Oh, I can play the guitar a little. And juggle. Once I hypnotized a gopher and made it believe it was a chicken....

5. Who are you reading right now?
The Korean poet Ko Un, an old Colin Wilson novel called The Sex Diary Of Gerard Sorme and a Phillip K. Dick novel: We Can Build You.

7. What is the toughest scene you ever wrote?
The one that broke my heart because I realized I was writing about something painfully personal. And no, I'm not telling you where to look. Ha!

8. Where do you find your inspirations to write?
It must be that blank spot on the wall behind my laptop, since I spend so much time staring at it.

12. Do you outline your stories or do they just take you along for the ride?
With short stories it's a fine line between knowing too much and too little. I try to balance the idea like a brimming tea cup in my mind. On the one hand, I don't want to get bored. On the other hand, I don't want to get lost. With novels (not that I've sold any, so you have to take this for what it's worth) I try to know as much as possible before I start writing. That means reams of notes, chapter breakdowns, all that. Of course, once the writing DOES start, most of it goes out the window. But it still feels necessary.

Jack Skillingstead is a speculative fiction writer from the Pacfic Northwest, a winner in Stephen King's "On Writing" contest in 2001, and finalist for the 2004 Sturgeon Award. His stories have appeared or are scheduled to appear in Asimov's, Realms Of Fantasy, On Spec, Talebones, The Year's Best Science Fiction Twenty First Annual Collection, The Year's Best Science Fiction Twenty Fourth Annual Collection, and Science Fiction: The Best of the Year, 2007 Edition. He is currently writing a short story in collaboration with Harlan Ellison.
heidi ruby miller heidi's pick six jack skillingstead