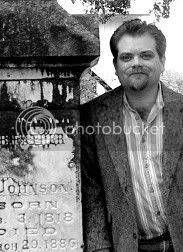 3. Coffee, tea, or milk?
Coffee. Lots and lots of coffee. I recently discovered that a person can achieve "caffeine poisoning," and that it is quite dangerous, so I've been attempting to cut down my coffee intake. As things stand now, I drink coffee starting at 6 a.m. and continue throughout the day until about midnight. If I'm still writing at midnight, I'm still drinking coffee. That might explain the manic expression, the buggy eyes and the jumpiness.

4. What else can you do besides write?
I've had a very strange life, meaning I can do quite a few things. I was trained to sing operatic tenor (yes, I was once an opera singer in training), I play guitar (blues style), I was once a stand-up comic and, believe it or not, a professional model. You should see the photos from that last one. You wouldn't believe it was me and I only keep them around to prove that I was once a decent looking fellow. I also play blues harmonica and teach Karate. Other than that, I can flair my nostrils and wiggle my ears.

7. What is the toughest scene you ever wrote?
The toughest scene I have written to date was a scene from my first novel, "An American Haunting." In that scene, Gabriel Rosewood, who is a manic depressive father that is loosely based on me, is attacked inside his mind. The being attacking him hits his insecurities hard, driving him to feel worthless and like he hasn't a prayer of winning out. The scene was hard to write because having to call those feelings to light made me examine some very painful times in my life. That his wife found him and saved him was no accident. As I said, the character was based on me.

10. Are you into sports or other physical activities?
I'm a third-degree black belt in Kajukenbo Karate. I like watching hockey, but I don't watch any of the "traditional" sports like football, baseball, or basketball. I also play golf, albeit very badly.

12. Do you outline your stories or do they just take you along for the ride?
I've tried outlining, but my style of writing doesn't allow me to follow it very well. I begin with an idea and let the characters develop as they will and the stories develop as they will. Generally I have a beginning and an ending, and getting there is wherein the story lies. Sometimes the characters surprise me, sometimes the story goes in an entirely different direction. It really just depends on the story.

Scott Johnson's first novel, An American Haunting, is a classic haunted house story in the vein of Richard Matheson's The Legend of Hell House and Stephen King's The Shining. His second book, Deadlands, was released in 2005 by Harbor House Books, as was The Mayor's Guide to the Stately Ghosts of Augusta, the first in a series about real ghosts across the nation. Coming up soon from him is the novel Cane River: A Ghost Story and the next in the "Mayor's Guide" series, about ghosts of Austin, TX.