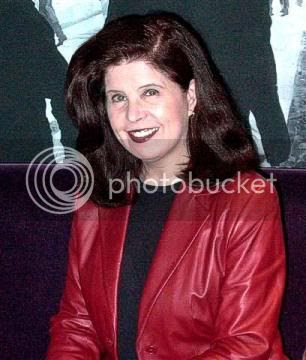 1. Which of your characters is your favorite?
My favorite character is Robert Cavanaugh, from two books, out-of-genre thrillers, that were not great successes except with me. Cavanaugh is an FBI agent. He's a wonky agent (my editor thought I should make him "tougher, more masculine;" I didn't) who faxes weird cartoons to women he's trying to court. He's funny, dogged, honorable, and terrible at courting. Strange people attach themselves to him. I fell in love with Robert Cavanaugh but, as Mia Farrow points out in THE PURPLE ROSE OF CAIRO, this lovable man "is fictional, but you can't have everything." Cavanaugh lives in my novels Oaths and Miracles and Stinger but, alas, nowhere else.

4. What else can you do besides write?
I can play chess, badly but a lot. I can cook, not too badly but definitely not gourmet. However, my meatloaf is a contender. I can teach writing. I can pull my right thumb out of joint at will. I'm superb at having lunch out. I can read: quickly, compulsively, with full-body attention. I get very involved in books; reading is for me a contact sport.

Things I cannot do but wish I could: Dance. Sing. Understand royalty statements. Remember faces and names. Write like Ursula LeGuin. Stay awake later than midnight.

6. Pop culture or academia?
Suspended halfway between. This is difficult, as the intersection of people who like both Jane Austen and John Grisham appears to be a null set, except for me. Ditto liking both Hollywood movies and art films, ballet and square dancing.

9. Food you could eat everyday.
Chocolate. Is there any real disagreement on this point?

11. What kind of music speaks to you?
The kind with words. Being almost tone-deaf, musical subtleties are lost on me. I like show music, pop tunes with good lyrics, even some country and western. This, my friends tell me, is very low-rent and I should pretend to understand Schubert, which I don't.

13. Celebrity crush.
Aaron Sorkin. I have never met or seen Aaron Sorkin, or even a picture of him, and a man who periodically gets arrested for doing mushrooms is perhaps not the best choice for a secret heart-throb. Nonetheless, a man who can write like he did for WEST WING has me gasping. Although -- what on Earth happened with STUDIO 60? My personal theory is that an invasion took Aaron away and left a pod person behind.

Nancy Kress is the author of twenty-one books: thirteen novels of science fiction or fantasy, one YA novel, two thrillers, three story collections, and two books on writing. Among her novels are Probability Space (Tor, 2002), the conclusion of a trilogy that began with Probability Moon and Probability Sun, Crossfire (Tor, 2003), Nothing Human (Golden Gryphon Press, 2003), and Crucible. The trilogy concerns quantum physics, a space war, and the nature of reality. Crossfire, set in a different universe, explores various ways we might co-exist with aliens even though we never understand either them or ourselves very well. Nothing Human concerns a bleaker future, in which we have trashed Earth beyond the point of human habitability. So we genetically engineer our descendants--who may or may not be considered human.

Kress’s short fiction has appeared in all the usual places. She has won three Nebulas: in 1985 for “Out of All Them Bright Stars,” in 1991 for the novella version of Beggars In Spain, which also won a Hugo, and in 1998 for “The Flowers of Aulit Prison.” Her work has been translated into Swedish, French, German, Italian, Spanish, Polish, Japanese, Croatian, Lithuanian, Romanian, Greek, Hebrew, and Russian.