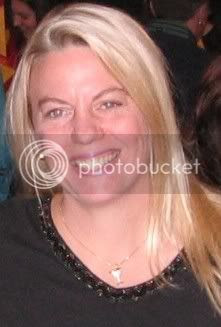 2. Tell me about your travels.
Traveling has been part of my life since I can remember. My dad worked in telecommunications and we moved every couple of years to different locales— including Saudi Arabia, Kenya, Austria, Switzerland, and Puerto Rico. I still have the travel bug, so I set all of my books in places where I’d like to visit! I’m fascinated with exploring foreign places, cultures, and languages.

4. What else can you do besides write?
I love trying new things, especially when they involve a thrill or speed! Flying small planes, hot air ballooning, motorcycling, rafting—you name it, I’ll try it unless it involves heights! Scuba diving, snorkelling, sailing, water skiing, and anything else that involves warm water also rate high on my list. I’m convinced I was switched at birth with someone who is now residing in the Virgin Islands.

7. What is the toughest scene you ever wrote?
My first novel, FALSE DAWN, opens with an eight-year-old African boy named Mamadou being accidentally shot by the hero during a blinding sandstorm. That scene and the sequel where the hero unsuccessfully seeks medical help hit me hard. While Mamadou’s death was devastating, it created a volcano of motivation for the hero to seek redemption. His pain drove the plot forward and I was just along for the ride.

8. Where do you find your inspirations to write?
Everywhere. I people watch all the time and somehow, there seems to be a nefarious turn in everyone’s innocent actions. Ah, the bane of suspense writers!

12. Do you outline your stories or do they just take you along for the ride?
I’m a pantser, not a plotter. I’ve learned to accept that even though it leads to endless sleepless nights and anxiety-ridden moments. I often write myself into a corner with no way out…but then somehow, after interminable grief, I find that hidden door!

13. Celebrity crush.
Matthew McConaughey. Oh la la. The bone structure, the accent, the glint in his eye…but would someone please send him an electric razor?

Isaac Asimov put it poignantly when he said, “If my doctor told me I had only six minutes to live, I wouldn't brood. I'd type a little faster.” Writing is KJ Howe’s lifeblood, the cadence of the words her pulse. Words have captured her imagination since she first read See Spot Run in nursery school. An eclectic education followed, as she was shuttled across Africa, the Middle East, Europe, and the Caribbean due to her father’s work. Books were her sanctuary, an escape from the pressure of being the new kid.

After graduating from University of Toronto with a Specialist Degree in Labor Management Relations, KJ tried the business world—but the creative pull to write was irresistible. She works as a medical writer, an excellent training ground for research and answers to countless Jeopardy questions. Determined to make her dream of becoming a novelist a reality, she pursued every writing course available. Her education continues to this day with a Master’s Degree in Writing Popular Fiction from Seton Hill University.

KJ has the honor of being a finalist in the Golden Heart and the American Title III Contest, where you can vote for her by emailing webmaster@romantictimes.com with ONE SHOT, TWO KILLS in the subject line. She is represented by the Evan Marshall Agency. She currently lives north of Toronto with her husband, an attorney and her first reader.
Posted by Heidi Ruby Miller at 10:00 AM