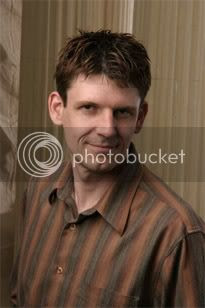 1. Which of your characters is your favorite?
I'd have to say Varis, which isn't a surprise since the first three books revolve around her. In The Skewed Throne, not too many characters survive the book, let alone the chapter in which they appear. That cuts down on choices. But I like Varis because she isn't "good" and she isn't "bad," she's just a person. She's practical, and is willing to do what needs to be done in order for things to change. Not at first. A lot of the first book is getting her to realize that she needs to change the situation herself, and her finding the strength to do that. She's faced with morally ambiguous questions at points, ones that don't have good or perfect solutions, but she makes the best she can of the situation. I think people can relate to that. In the end, I'm hoping she comes across as a strong but vulnerable person, one who can be hurt and has been hurt herself in the past.

4. What else can you do besides write?
Well, let's see . . . I have a significant musical side. I play the piano, and after 12 years of lessons I can do a little bit more than play chopsticks. I haven't been practicing much lately at all, though, so if I sat down to play I'd be rather rusty. I also learned to play the clarinet, the violin, and some of the percussion instruments. (In high school, I played the clarinet in band, then switched over to percussion during the marching season.) I went to school for mathematics and ended up getting my PhD, so I'm somewhat good at math. This is really just as a day job, to earn money to, you know, pay bills and such. To entertain myself, I also play raquetball (although it has a tendency to seriously screw up my knees), teach a spinning class at the gym, and work out at the gym on a regular basis. I can also cook decently, and REALLY enjoy baking cookies.

5. Who are you reading right now?
At the moment, I'm nearing the end of Michelle West's Sun Sword sextet. I'm reading book 5, The Riven Shield. The series was recommended to me by my editor and after reading her first Hunter books, and now this series, I can see why. Michelle West has a character (Jay) who is very similar to Varis in a lot of ways. Jay was a thief in the city, but has her own moral code that is essentially good but practical, and she struggles with many moral issues and decisions throughout the course of the series. Also, some of the themes in Michelle West's books are close to themes in my own novels. The idea that an object can store the knowledge of people from the past, for example. In my books, the throne serves this purpose, holding the personalities of all of those who've touched it over the last 1000 or so years. In my book, the throne has so many people that it has essentially gone insane. Michelle uses a similar device in her books, although she doesn't have insanity as a consequence. I definitely think that anyone who's read Michelle West would also like the Throne novels, and anyone who likes my books should read Michelle West's series as well.

7. What is the toughest scene you ever wrote?
The toughest scene I've ever had to write would be the scene in The Skewed Throne in which Varis realizes that Bloodmark, her rival on the Dredge, is going to kill the white-dusty man. The white-dusty man (a baker) is the only person on the Dredge that cares for Varis when she's younger. He leaves her food on a regular basis, but they never really "meet" and aren't friends in any sense that we'd think of as friends. But there's still a connection there, and Bloodmark realizes that, and so when he wants to hurt her he goes after the baker. The scene was hard to write simply because of the emotions involved. Varis is desperately trying to reach the baker in time to save him, but she doesn't even come close. When she "feels" the baker's death, it crushes her. Trying to find the words to express this, to make the reader feel what Varis is feeling, was extremely difficult.

9. Food you could eat everyday.
Chocolate. I eat chocolate every day, in some form or another. I am a chocoholic. I prefer milk and dark chocolate, although I won't say no to white either. I particularly like chocolate mixed with peanut butter. My favorite is probably the peanut butter smidgens from Gertrude Hawk, although I've rarely said no to any form of chocolate. Chocolate cake, cupcakes, chocolate bars--any form will do. *grin* If you're looking for something less . . . cocoa-y, then I'd have to say this artichoke dip that is a family recipe. It's delicious. Note I do not say that it's healthy. It is extremely not healthy (it uses an entire cup of real mayonnaise). But get a box of Triscuits and a bowl of the artichoke dip . . . and I'm happy for an extremely long time.

12. Do you outline your stories or do they just take you along for the ride?
Oh, my stories always take me along for the ride. I typically start with a few scenes in my head, strong scenes, from various parts of the book. One of these scenes is the first one, so I write that, and then I see where the characters lead me. I shoot for whatever I feel the next strong scene is and see what happens along the way. In general, these later scenes get rewritten or revised along the way as the story changes, and sometimes they get eliminated completely. I just handed in the rough draft of The Vacant Throne to my editor and it's ending is completely different from what I initially imagined. I realized about halfway through the novel that the ending I thought would be perfect wasn't going to work, and once I allowed myself to "give up" that ending, the rest of the book fell into place. The fun of writing, to me, is NOT knowing where things are going and seeing what develops along the way. If I outlined everything, had everything plotted out before I began, I don't think I'd enjoy writing as much. In fact, I don't think I'd bother to write at all!

Joshua Palmatier was born in Coudersport, PA, but since his father was in the military he moved around. Alot. He's lived in the states of Pennsylvania (three times), Florida (twice), Washington, California (briefly), Virginia, Texas (twice), and now resides in upstate New York. He has spent the majority of his life so far going to school, earning a Bachelors of Science and a Master of Arts degree in mathematics from the Pennsylvania State University, followed by a PhD in mathematics from Binghamton University. He is currently teaching mathematics (what else) at Lock Haven University of Pennsylvania, and taught for three years at Bloomsburg University while taking a break between his masters degree and the PhD.

Joshua started writing science fiction and fantasy novels and short stories in the eighth grade, when the teacher assigned a one page short story. He wrote a story about Atlantis. It was from the perspective of one of the inhabitants as he escaped in a spaceship, watching his world being destroyed by water from one of the viewports of the ship. He got an A. Joshua has never stopped writing since, mainly focusing on novels.

The Skewed Throne, Joshua's first published novel, is now available in paperback. The sequel The Cracked Throne is out in harcover, and third in the series The Vacant Throne will be out early next year. You can email Joshua at jpalmatier@sff.net.
heidi ruby miller heidi's pick six joshua palmatier