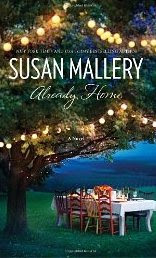 Don’t give up. Getting published is a whole lot less about talent than it is about persistence. There are hundreds of talented writers who will never sell because they won’t finish/edit/submit their work. No publisher is going to knock on your door and beg to read what you’ve written. It’s up to you to polish it and get it out there. It’s also up to you to write the next work.

You never know which book is going to be “the one.” I started writing romance in college, while studying accounting. One December, during my second to last semester, I was very close to beginning my big push for finals. I was in my last writing session for nearly two weeks. I had the whole day to write and I was so excited to spend all that time with my characters.

About ten that morning I got a call from the agent I had at the time, telling me I had a rejection. Being a brave little soldier, I handled the call professionally and went back to my computer. Just before lunch, I went to check the mail and there was a different rejection. Two in one day, on different projects.

I really lost it. I started crying and knew I could never do it. I would never sell. I didn’t have whatever was required and I should just give up. I thought about not going back to write in the afternoon, but something told me if I gave up at that moment, I would never go back to it again. That I would forget about writing and my dream to be published would be over. Frankly, I wondered if that was so bad. Who was I to think I could be published?

But the dream was more powerful than my disappointment, so after lunch I returned to my computer where I wrote the first kiss in that story. I was crying the whole time, knowing I was an idiot for believing, but I wrote it anyway.

That first kiss still exists, word for word, in my first published book. Because that’s the one I sold. If I’d stopped that day, I would never have known how close I was. I wouldn’t have achieved my dream.

So don’t give up. You can’t know when it will happen or where. Yes, it’s hard. In NY publishing, approximately one in a 1000 submissions are bought. One in 1000. But I did it. Other people did it. It’s not that we’re so much more talented—it’s that we didn’t give up. Neither should you.